Accessible Venice for All

Accessible Venice for All: Off the beaten path walk in Venice

Always wanted to explore the magical city of Venice without following the hustle and bustle of tourists and crowds? Then this tour is just the thing for you!

Discover the floating city of Venice without following the beaten routes with bustling crowds. We will experience the city in selected hidden alleyways and paths that lead to hidden jewels and we will wander through local neighbourhoods, stunning palaces overlooking the canals and beautiful gardens.

As you take in the peaceful vibes, you’ll get a glimpse of day to day Venetian life, before stumbling upon a church that was used as the setting of a movie. Head towards the canal where locals love to buy their fruits and vegetables straight from a boat.

Every corner you will explore has something unique in store for you. Like a hidden 14th century church with a calming ambiance and a very beautiful and richly decorated inside.

Continue strolling around between narrow “calli” and “campi” where local kids play. Follow your local guide among beautiful palaces, must-see hidden churches in quiet corners, ending up in one of the most scenic spots of Venice.

What to expect during Accessible Venice for all tour

A mill transformed in a luxury hotel: We will pass along San Basilio – once the maritime terminal where all the steamers used to arrive back in the 19th Century. It overlooks the Canale della Giudecca and we admire the Giudecca Island on our right with the magnificent building, an important example of 19th century industrial archaeology now housing a hotel.

A large promenade: This wide fondamenta was once called “Carbonaia” (because of the coal – carbone in Italian – that used to be unloaded here). Paved in 1519 was then called “delle Zattere” because the rafts – Zattere – with wood for the Arsenale arriving from the mainland by river and then by lagoon used to be docked here.

A Fortune goddess over the Dorsoduro triangle tip: We will reach an amazing building, which now hosts an art museum in one of Venice’s old customs buildings, a triangle-shaped scenic area in Venice where the Grand Canal meets the Giudecca Canal with a collection of buildings: an impressive baroque church, the Patriarchal Seminary of Venice, and a Fortune Goddess statue over the triangle tip.

Everything started 800 years ago and saintly barrel of lard. We will discover the legend behind the golden basilica built around a smuggled holy relic.

A subtle and powerful white and pink palace: We will get fooled by the genteel Gothic elegance of Doge’s Palace: behind its lacy, pink chequered façade, this palace is still showing nowadays serious muscles and steely will to survive to the more and more frequent flooding.

An ultramodern shop from the 50’ in St. Mark’s square: We will look at an extraordinary shop, now converted into a small museum, commissioned by a high tech Italian entrepreneur to a famous architect, who transformed in 1958 a dim souvenir shop into a showcase for its futuristic (for the 50s) typewriters and computing machines

A bohemian bar since 1720: We will indulge by stopping at the bar counter of an historical café in Saint Mark’s square, as Venetians do at venetian prices. For instance, at the oldest one since 1720 or at the one preferred by the opera composer Richard Wagner, surrounded by baroque mirrors and politically incorrect antique moor’s head chandeliers Do you want to add some energy to your espresso? We will ask it “corretto”, (coffee corrected with “grappa” liquor)!

Where it was, as it was: The 99 meters tall Saint Mark’s church tower has been rebuilt too twice since its initial construction in the 9th century. Galileo found it very handy for testing his telescope in 1609 but when it collapsed in 1902, Venetians decided to rebuilt the tower where it was, as it was, brick by brick.

A modern factory from the middle ages: We will walk along the Arsenale walls, which quickly grew to become Europe’s greatest naval installation and the largest productive complex in the world, becoming the very heart of Venice’s mercantile and military power. It was said that Venice was able to build a war galley a day: it was probable a fake news from Middle ages to impress enemies, but we will learn anyway about this unique pre-industrial example of mass production, with a centralised organization, standardised processes and stringent quality control which anticipated the modern factories.

A garden created by Napoleon: We will stroll along the Giardini built in the 19th century when Napoleon decided the city needed a little breathing space. Nowadays it is the historical site of the Venice Biennale national pavilions, showcasing the contemporary trends in arts since 1895. 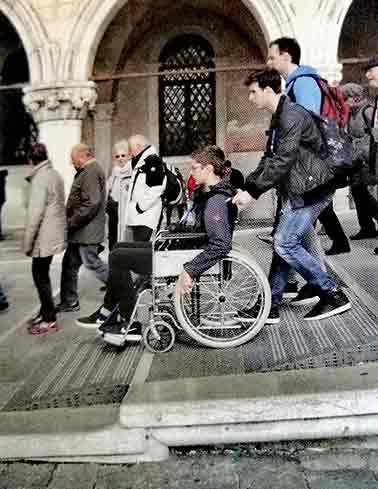 Accessible Venice for All – Accessible bridge by wheelchair

An itinerary, adaptable on site according to the needs and interests of the customer and to the hotel pick-up (included for hotels in the historic center of Venice), which allows you to visit Venice between highlights and hidden gems. The standard duration is 6 hours

Rates on demand.
It does not include the cost of vaporetto tickets (1.50 Euros per traveler with disabilities for 75 minutes including a companion).

For any information, wishes or special need regarding the Accessible Venice for All please do not hesitate to email info@accessibleitaly.it