Campania and Naples are accessible and  are between the most interesting locations in Italy.
Naples is Campania capital, a fascinating city but nevertheless with serious accessibility problems created above all by the chaotic and convulsive traffic that runs through streets and alleys through centuries-old neighborhoods.
Problems related to general accessibility can make a visit to the city uncomfortable for tourists and for a wheelchair user in particular. 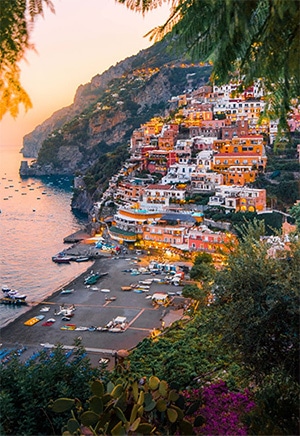 However, the interest of its monuments and its most ancient districts can reward the traveler for inconvenience; however, more than in other Italian cities, we would like to recommend that you be accompanied by a professional guide to avoid misadventures.
Naples hosts one of the most famous Italian opera houses, the San Carlo.
It is accessible by wheelchair and on the site you can consult the billboard of the operas.
And if you like pizza Naples is where pizza was born and where it spread in the world.
Take advantage of your holiday in Naples to taste pizza according to the traditional recipe.
But check first accessibility.

In addition to the city, where tourists often arrive also with cruise ships for a few hours stop, Naples offers interesting surroundings both from a natural and historical point of view.

In the eyes of the traveler, the looming presence of the volcano Vesuvius appears in every panoramic view of the city.
The Vesuvius National Park can be visited in part by people in wheelchairs who can climb up to the Inbò Poto Refuge at 1.1187 Mt.
It is not possible to reach the crater in a wheelchair.

At the foot of Vesuvius there are some of the largest Italian archaeological areas.
Pompeii and Herculaneum, the 2 Roman cities, which in 79 AD they were covered by ashes and pyroclastic clouds erupted from the volcano. In this way the life of the ancient Romans, their customs and traditions, even the most common, were crystallized and protected for centuries to allow us to know in detail the life of the Romans of 2000 years ago.
Following decades of archaeological excavations, large parts of these cities have been unearthed and are open to the public.
Herculaneum is largely accessible while only a portion of Pompeii, however very large, is accessible by wheelchair.

The Sorrento peninsula, in a unique landscape of rocks, sea and fascinating villages, offers tourists, even in a wheelchair, a necklace of rare pearls: Sorrento (where it is also possible to stay in good quality and accessible hotels), Amalfi, Positano, Maiori, Minori, Ravello, … The winding road route and the traffic make it necessary to have many hours or to divide the tour into several days by staying overnight in Sorrento, Castellammare di Stabbia or Salerno.

The island is another of the pearls of Campania but accessibility is complex.
To arrive there are ferries and hydrofoils. Ferries are more accessible and depart from Naples and Sorrento.
On site the funicular is accessible and allows you to reach the center in whose surroundings you can move enough.
To reach Anacapri in theory there is an accessible bus but it is not always available.

The Royal Palace of Caserta, which arose from 1750 in what should have been the new capital of the Kingdom of Naples, is the Italian Versailles.
The Royal Palace is accessible by wheelchair and also offers an accessible transport service to reach the Royal Palace from Caserta station.
Campania and Naples are accessible and they welcome you!