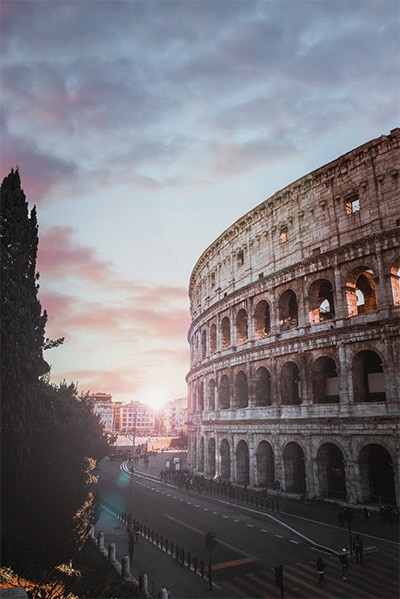 It retains traces of this very long period in the monuments and also in the character of its disenchanted and sarcastic inhabitants.
Some of the most famous archaeological monuments in the world remain from the Roman period.

The Colosseum, a true icon of the city or the Forums, the Arch of Augustus, the Baths of Caracalla, plus dozens of other archaeological remains.

From the following historical periods there are monuments linked to its past as the capital of the Catholic Church and to the work of hundreds of artists who produced their works for the Papacy giving Rome an immense artistic and cultural legacy.
In the last 160 years the city has partly modified its appearance with neoclassical buildings, wide streets but retains, in the vast historic center areas such as Trastevere, the area around Campo de ‘Fiori and other central areas an ancient and popular aspect where the traveler meet photographic and gastronomic opportunities!

Regarding accessibility, Rome has numerous critical issues:
Its historic center is wide with strong differences in height being the city built on the famous “7 hills”
The pavement is almost everywhere composed of cobblestones.
The sidewalks, especially in the more characteristic areas, are, if they exist, narrow, rough, with few slides and curbcuts.
Public transport is one of the biggest problems for the Romans themselves.
Both for the 2 subway lines and for the land lines: not very accessible, crowded, practically unusable by a traveler in a wheelchair.
To this we can add the traffic among the most chaotic of Italian traffic, the low propensity of the locals to respect pedestrians, etc.
In short, Rome cannot be defined, in general, “wheelchair friendly”.

Rome why to see?

Having said that, we must also say that what Rome offers the traveler cannot be offered by any other city in the world: not Paris, London, New York, Beijing, Tokyo, …
So we can say that “the game is worth the candle” and your efforts and sacrifices will be repaid!

After this honest and disenchanted analysis of the negative aspects, let’s move on to the unique and positive ones and also to the precautions to make the stay as less complicated as possible.
Most of the tourist attractions are accessible, both the archaeological ones (which may not be completely but they are largely and maybe with a little help), and the museums or churches that are among the main attractions of the capital of an ecclesiastical state that has governed it for over 1000 years.

Both Colosseum and Roman Forum have an elevator to make them accessible.
With regard to the Vatican, San Pietro is accessible as accessible (and free for people in wheelchairs) are the Vatican Museums and the Sistine Chapel accessible via a stairlift.
If public transport is impractical, it is possible to book private accessible transports, which can also access restricted areas for traffic and have reasonable costs.

Everywhere there are restaurants with outdoor tables and Rome is a city where having lunch is cheaper than in other tourist cities.
We suggest the Campo de’Fiori area, home to the most famous food market in Rome or Trastevere, formerly a popular area that is now very trendy.
There are, in the central areas, excellent hotels with rooms accessible by wheelchair, with roll in shower, with accessible common areas that can be the starting point for excursions in the surrounding area.
In Rome there is something to see at every corner.

Rome how to visit?:

So the suggestion is to organize your days so that you have a program that allows you to group the attractions you want to visit in order to reduce accessible private transport to essential ones.
To use the services of a professional guide who will help you solve accessibility problems and enrich your visits.
For those who like to visit more independently there is the solution of the HopOn HopOff tour.
There are several companies that offer them and buses generally have a wheelchair station at the ground level near the central door with a ramp.
Visibility is quite sacrificed for wheelchair users but the cost of the tour which allows about ten stops is around 25 Euros depending on the company.

Lazio and Rome accessible, not far from Rome there are other interesting and accessible tourist locations.

The beach of the Romans retains an interesting archaeological area which is largely accessible by wheelchair and which is worth a visit if you are interested in Roman history.

Location on the hills that rise to the east of Rome and where Villa d’Este is a Renaissance jewel. The villa is accessible by lift while to visit the beautiful gardens which are among the attractions of the Villa it would be better to use an electric vehicle because there are steep paths. Sometimes the electric vehicle is not available.

With a day trip in a private accessible van you can visit an area rich in history. The area bounded by Viterbo, Bolsena Lake, Montalto di Castro and Tarquinia has a very ancient history, prior to that of Rome. It was part of the Etruscan territory. The Etruscans were the first enemies of Rome, they were conquered and then gave 3 kings to Rome. The region has beautifully landscaped between lake and beaches, while the towns retain, in the historic centers, a fascinating medieval aspect and are rich in historical vestiges, palaces, museums and churches. Many buildings can be visited and accessible by wheelchair. More details are available upon request anyway Lazio and Rome accessible to travelers by wheelchair